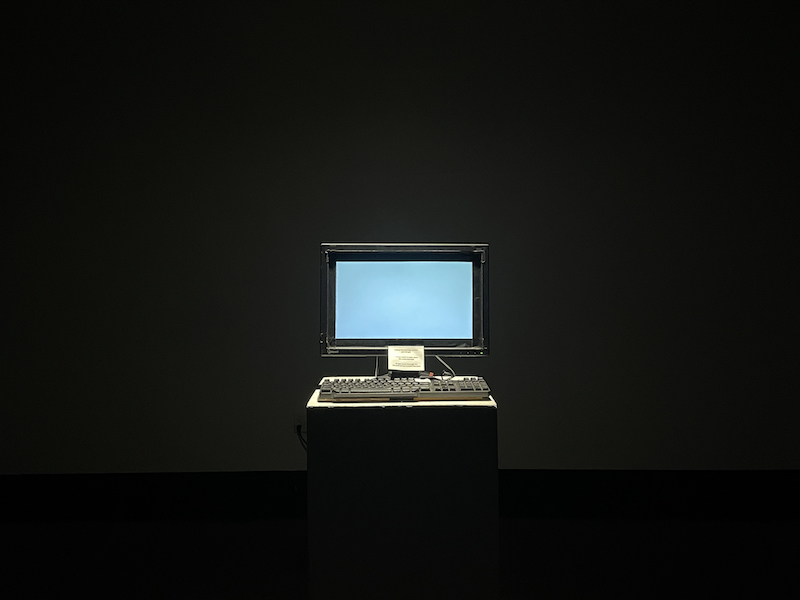 Intimate Messages is an installation for interactive messaging system, sine tones, contact microphone, paper, and yarn, displayed in the CalArts Wave Cave from April 17-23, 2022. The installation was divided into two phases: an interactive phase for audience engagement and a non-interactive fixed phase. I manually changed the installation between the two phases midday on April 21st.

From April 17-21, participants would enter the space greeted by a low beating hum of randomized sine tones between 60 and 80Hz. They would then write an anonymous message to the next person to interact with the installation using a messaging system that looks like a normal computer and keyboard. That next person would then enter, read the message written for them, and clear it using the ENTER key to make room to write another message. When the message was cleared, it was converted into a musical message of sine tones based around an imperfect version of the first eight partials of the overtone series. This musical message would play in the four speakers in the Wave Cave, only to be heard by whoever is in the space at that moment. This process of sending anonymous messages continued for the three days. Participants sent 109 messages in total and the messaging system automatically saved each message. I coded this system in Max/MSP and placed a contact microphone under the keyboard to amplify the sounds of typing. 0:00-1:04 documents this phase in the accompanying video.

From April 21-23, I displayed the messages on the wall of the installation space using paper and yarn. A single string of yarn ran from paper to paper to indicate the progression of messages during the previous three days. The yarn ran from a non-functional display version of the messaging system, to each consecutive message, to a tangled ball of yarn with the message, “and many more unwritten...” taped to it. The entire chain of musical messages were saved by the messaging system and continuously looped in the speakers during these last two days, indistinguishable from one another. 1:09-2:25 documents this phase in the accompanying video.

Jack Herscowitz is a Los Angeles based composer who engages deep inter- personal collaborations, trans-disciplinary thinking, and alternate definitions of "score" to recognize music as a process which has always extended beyond the singular dimension of sound. His work runs the wide gamut of interactive sound installations, enveloping vocal soundscapes, noisy electronic improvisations, theatrical chamber music, and communal spaces for sound making. Jack  is pursuing an M.F.A. in Composition and Experimental Sound Practices at CalArts and holds a B.A. in Music and Environmental Studies from Middlebury College.