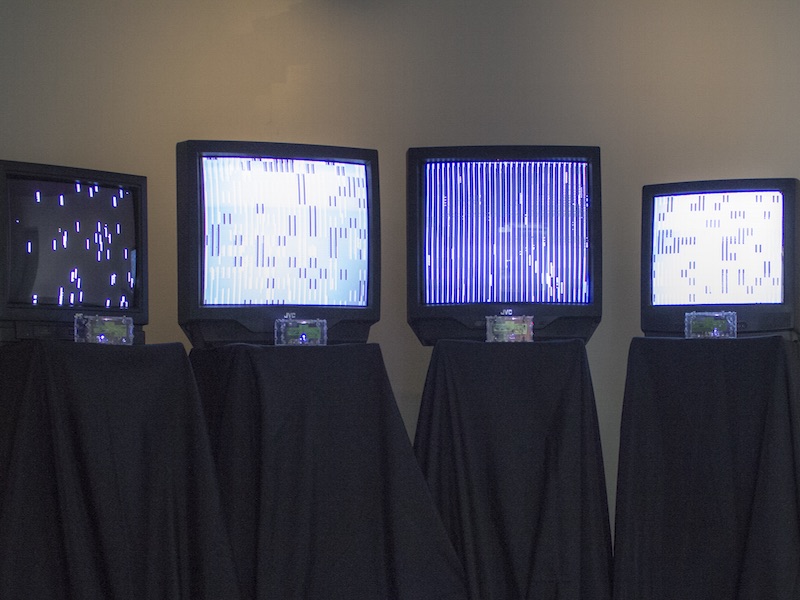 Cathode Ray Tubes explores unconventional approaches for human-circuit interaction by eliminating all sensors, buttons, knobs and all other “middle-men” between the circuit and the user. Video feedback loops are created out of four CRT TV’s and four NES knock-off consoles (Retrons). The Retrons circuit boards are exposed while the buttons, controller jacks and cartridge ports are removed leaving only the devices circuit board to interact with. With their circuitry unveiled, and with no software to guide the computational logic, the Retrons becomes very susceptible to electro-magnetic interference. They are effectively transformed into 8-bit a/v synthesizers that generate their output based on the electrical noise present in the circuit and the surrounding space. The human body becomes an effective mechanism for manipulating the state of the space due to our inherent electrical properties.The meer presence of a gallery goer injects energy into the feedback loops while kinesthetic interaction intensifies the effects.

Nathan Villicaña-Shaw is a new media artist whose works explore and question our social-personal relationship with technology. Interested in defining new boundaries for human-circuit interaction, Nathan works blend circuit bending, hardware hacking with creative coding and electrical engineering. Nathan spends most of his time creating interactive installation art, composing, hacking and working as a Python developer and creative technologist. Nathan is a MFA candidate, and BFA alum, from the MTIID department at CalArts.

Cathode Ray Tubes was installed in The WaveCave from April 4th to April 11th, 2016.