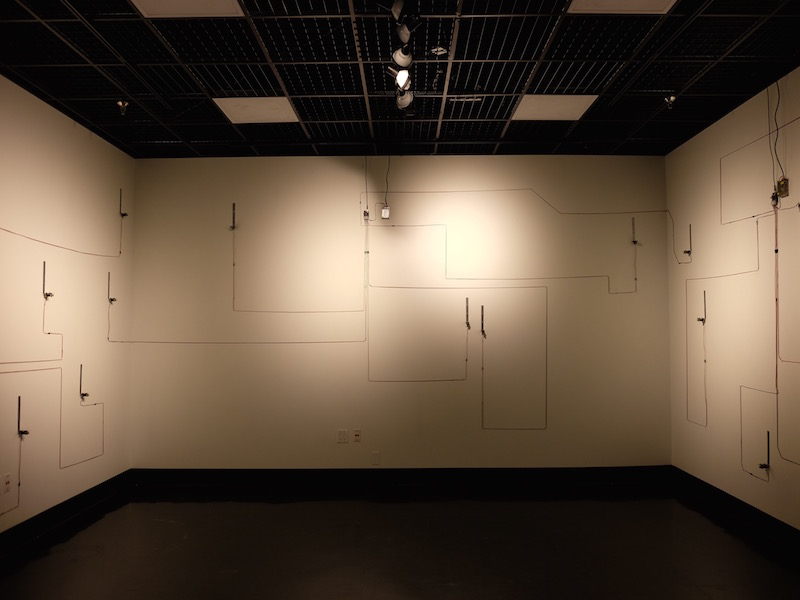 Mechatronic installation. Eighteen solenoids are affixed to the walls of the space, driven by the use of an Arduino and a custom PCB design. Created for the retirement of the artist’s 2000 Mitsubishi Mirage. Notes are as follows:

Early last semester I totaled my car. It was a minor accident, and no one was hurt. I felt a strange attachment to this car that I had driven for nearly fifteen years, and it felt wrong that I had to discard it merely because it didn’t function anymore. So what if there was a hole in the radiator? So what if the bumper fell off? It was still my car, it drove solidly from Texas to California when I first started at CalArts; that’s 1500 miles in the cruel summer sun, surely it was deserving of something better.
But I couldn’t keep it, I couldn’t fix it, I gave it away to charity. Maybe I’m overly sentimental about the whole experience, but in the end it felt like I lost an appendage.

But what would it have meant if I had kept it? In its last state it could turn over, but the radiator would probably overheat if I drove it for more than a few minutes. What would it have meant to have kept an object that had no purpose? I mean, I’m no mechanic, I don’t have space for it anywhere. What, then, would its purpose be?

If they happen to strike the wall, it is definitely outside of my intention of them, but then again I am still definitely allowing for that contingency. I mean, it’d be impossible not to. These things aren’t perfect, they break, the caps on them get unscrewed, the zip ties slide back and forth, the programming is ripe with human error, etc

Then if these things on the wall, if they strike the wall, have they failed my prescribed purpose of them not striking the wall? When my Mitsubishi was killed after 15 years, should I have found a new purpose for it? Did I find a purpose by giving it away?

Eric Heep is an artist/performer/composer from Austin, TX, currently living in Val Verde, CA. His interests/works include mechatronic performance, creative coding, and reading as public performance.

Red Mitsubishi was installed in the WaveCave from March 28th to April 4th, 2016.