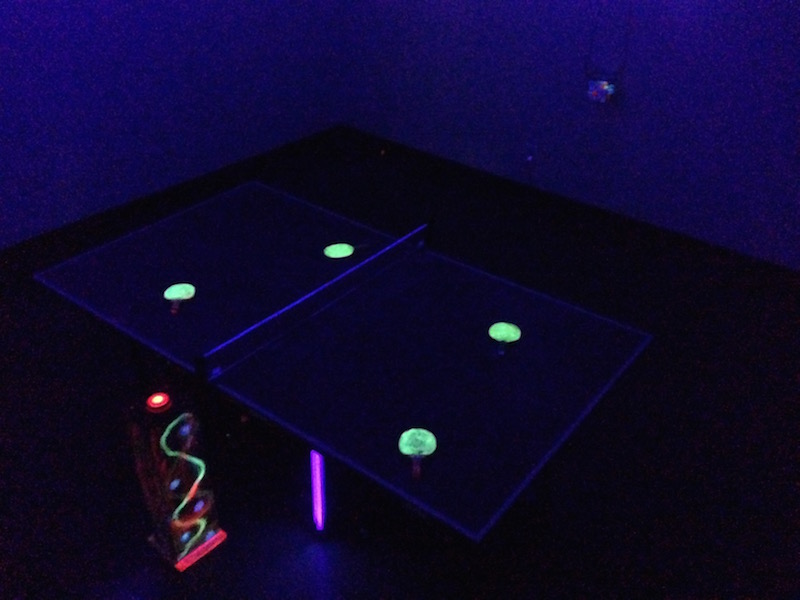 Pong Ping is an augmented reality table tennis (Ping-Pong) installation. A Ping-Pong table with 4 contact mics under it and 4 speakers in a quadraphonic configuration will be filling the space. As the participant enters the location he is immediately submersed into an immersive environment generated by 10 ultra-violet bulbs (a.k.a black light) that create a fluorescent ambient inside the gallery. Most of the objects inside the gallery are fluorescent in order to react to the UV light including the lines on the table, the balls and the housing for the paddles.
The users have the option of choosing between two states or two realities generated by the sound and controlled by a big red button. When the button is pressed it triggers a process that synthesize different types of sounds every time the ball bounces adding delay and frequency modulation to the sounds. When the button is pressed again it brings back the installation to its original state more organic, natural and quiet. The complete sound system is created using an Ambisonic encoder/decoder that allows to locate sound objects in a three-dimensional space and move them around it.

Martancho (aka Martin Velez) is a Colombian musician, sound engineer and digital artist under-graduated from the Faculty of Arts at Javeriana University, with experience in live sound and sound design for visual.  Currently seeking a graduate degree in Music Technology from the California Institute for the Arts. Martancho is interested in finding new useful ways to connect music, technology and art while having a lot of fun doing so. Martancho enjoys making lots of different noises (even music), building interfaces for expressive user interaction and musical performance, multimodal sensor systems and sound installations.
Martancho is also an experienced live and studio audio engineer. He is currently working as part of the staff for the concerts production at Calarts, his tasks include recording, webcast, stage manager and front of house. He has worked in a wide range of musical genres, from traditional Andean music to metal and jazz, doing the role of mixing/recording engineer, producer and sometimes performer as well.