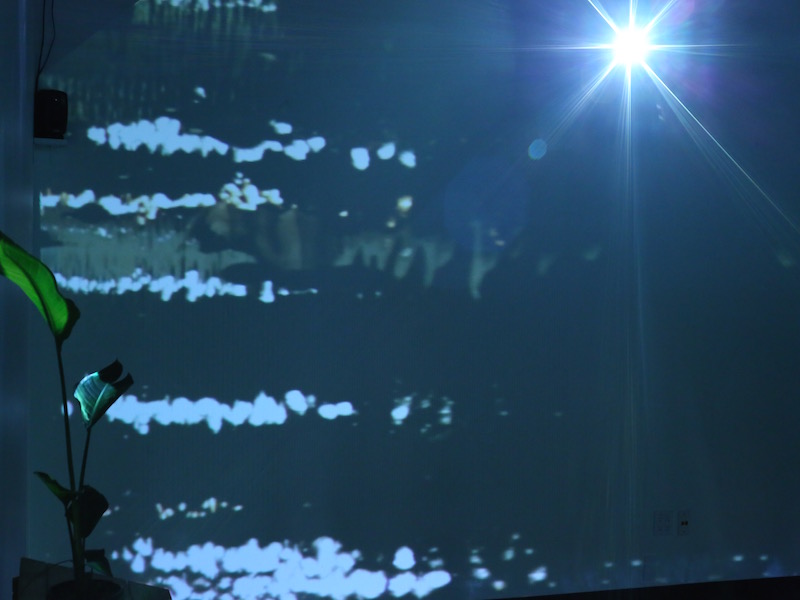 Collective Nature is a multi-dimensional immersion of both sound and video, which seeks to explore the ideas of the interconnectedness & collective memories we externalize between humans and the world around us via nature, including our intrinsically strong relationship towards the inorganic matter, such as hard drives and digital storage, which have become our memory’s ‘gatekeeper’. If nature is the metaphor for life, then digital storage is the metaphor for the shift in importance from human brain-to-computer, stimulating an alarming foresight towards our anthropocentric future.
There are essentially 2 components to this piece: The sculpture, and the visual/ auditory response that encapsulate each side of the room. Each wall provides a “window” into memories we all share, as footage and soundscape invokes feelings of distant nostalgia with imagery of nature and a narrative of specified scenes in which friends come together to share memories, exploring philosopher Michel Foucault’s idea of the collective memory. When a participant enter’s the installation, they will be immediately encapsulated by 3 different pieces of footage that will play in a loop, covering each side of the wall. As they progress from wall to wall to feel the vibrations of sound and observe the looping clips, they are immediately sent into a euphoric state of suspension. The sounds that will be played are of the Sympathetic Resonances, which are produced when certain notes in a harmonic series are held down on the piano and muted, as chords and motifs are played simultaneously, these sympathetic resonances are excited, causing a resonance that will be enhanced and played across each wall of speakers. The feeling of a tonic note is there but not actually played, leaving the viewers in an ungrounded state of transition or departure as they examine the space, providing a dream-like experience, and a connection to all of the images being projected. The plant’s relationship to the media played on each wall represents the nature of human’s relationship to technology as an extension of memory. This tangible relationship will link the curated experience of sounds and video to the audience’s actual participation within the instillation, creating new memories on top of simulated ones, hopefully invoking several nerve-pulsing brain signals that will be in tune with vibrations being felt within the sympathetic resonance swirling around the space. The viewer will give off their own energy and resonant vibrations, as the excitation of images/sound will connect to the installation via user experience, sharing a cosmic web of energy and become in tune with the vibrations before they exit the room.
Special thanks to: Vinnie DeMaria, Shannon McCauley, John Olivo, David Sepulveda, Jessica Bronson, Clay Chaplin & the ESP group for all the helpful insight & contributions.

Plenum #1: Collective Nature was installed in the WaveCave from March 7th to March 14th, 2016.