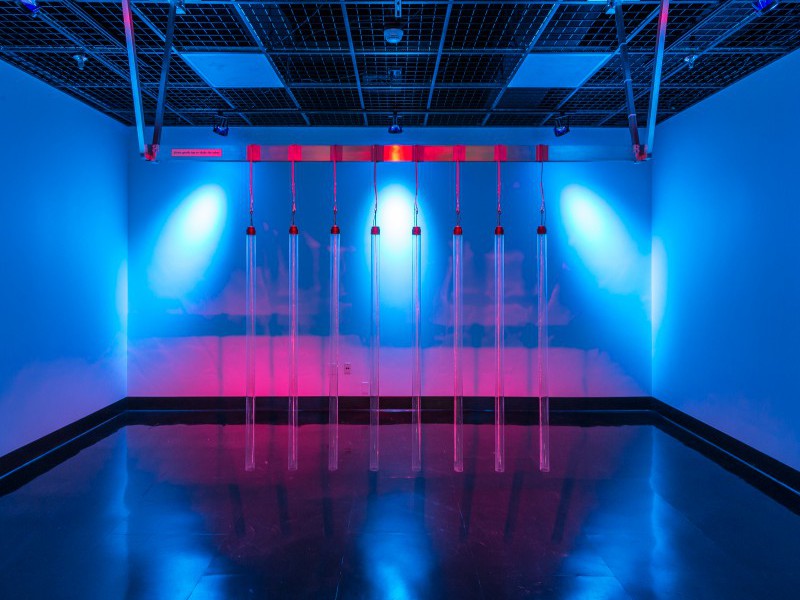 Hanging acrylic tubes containing bead-chain generate acoustic impulses that trigger and control the synthetic sounds present in this piece. Each tube has a contact microphone embedded in its cap, and when a tube is tapped or shaken the vibrations are transmitted to a computer running custom signal processing software. Several types of sound generating algorithms are employed, including granulation, wavelet synthesis, rotating variable delay, formant synthesis, spectral reverb, and additive synthesis. The contact microphones afford expressive control of these sounds by providing a wide range of amplitude values that are mapped directly to various parameters of the synthesis algorithms.

Noctiluca Scintillans, commonly known as the Sea Sparkle, is a free-floating marine-dwelling species of dinoflagellate that exhibits blue bioluminescence when disturbed. The bioluminescence occurs due to a chemical reaction that takes place in thousands of spherically shaped organelles, called scintillons, which are located throughout the cytoplasm of the organism’s single cell.

Cooper Baker is a sound artist living in San Diego, California. He regularly plays experimental music at venues along the west coast and his artwork has been exhibited in galleries and publications throughout the United States and abroad. In addition to his own creative output, he provides other artists and companies with custom software and electronics as a creative technical consultant.

Originally from Los Angeles, he recently moved to San Diego to attend the University of California San Diego in pursuit of a computer music Ph.D. where he is studying with Miller Puckette, Tom Erbe, and F. Richard Moore. Prior to enrollment at UCSD he was a music faculty member at California Institute of the Arts where he also received his MFA in experimental composition and finished his BFA in music technology. While at CalArts he refined his artistic practice and began incorporating new and experimental electronic media in his artwork and music production, under the guidance of Morton Subotnick, Mark Trayle, and Barry Schrader.

Noctiluca Scintillans was installed in The WaveCave from September 10th to September 22nd, 2014.