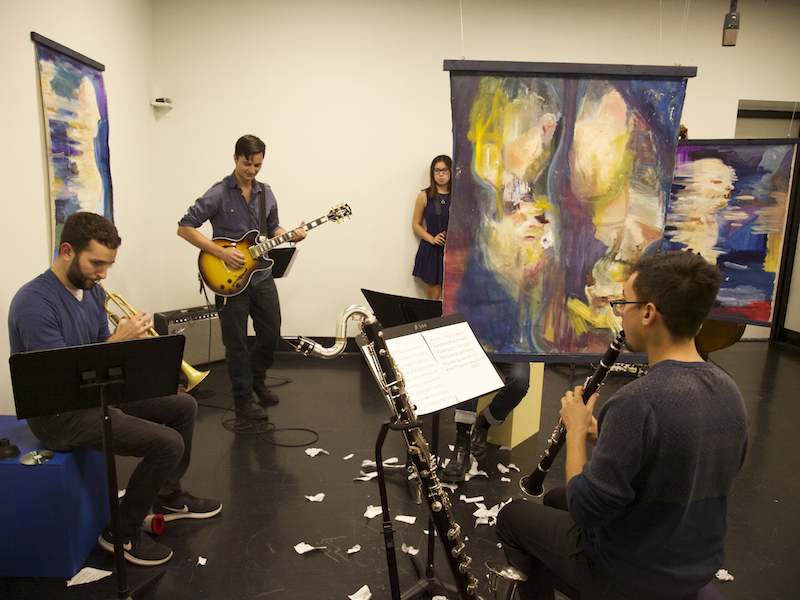 Relic/Resonance was an exhibition of overlapping processes. Sam Chen and Ian Stahl began by simultaneously creating visual and musical compositions. By juxtaposing the music and visuals, the performance became a conversation between the composed music, the newly improvised music and the visual predecessors. Both visual and musical compositions were reinterpreted by each performer’s improvisation. By recording this unique live performance, looping, gradually distorting and processing it into its own original piece of music, the transformation process continued throughout the duration of the installation. The loop played for 200 hours and went through at least 50 iterations.

Ian Stahl is a composer, multi-instrumentalist, and programmer whose multifaceted work includes multimedia collaborations, primarily with film and dance, song writing, and instrumental jazz. His recent projects include a motion tracking program, composing for a nine piece band, and a co-composed score for dance with laptop, vocals, guitar and keyboards. Stahl graduated from Amherst College Magna Cum Laude in 2014 and then worked at Amherst College as the Arts Coordinator. Stahl co-founded Innovation Out Loud, a company that specializes in music for multi-media, with friend and collaborator Ben Muller. He currently is attending the Performer-Composer MFA program at the California Institute of the Arts. Though his music draws on many different styles, his powerful voice and lyrics make his music accessible to audiences everywhere.

Relic/Resonance was installed in the WaveCave from October 10th to October 17th, 2016