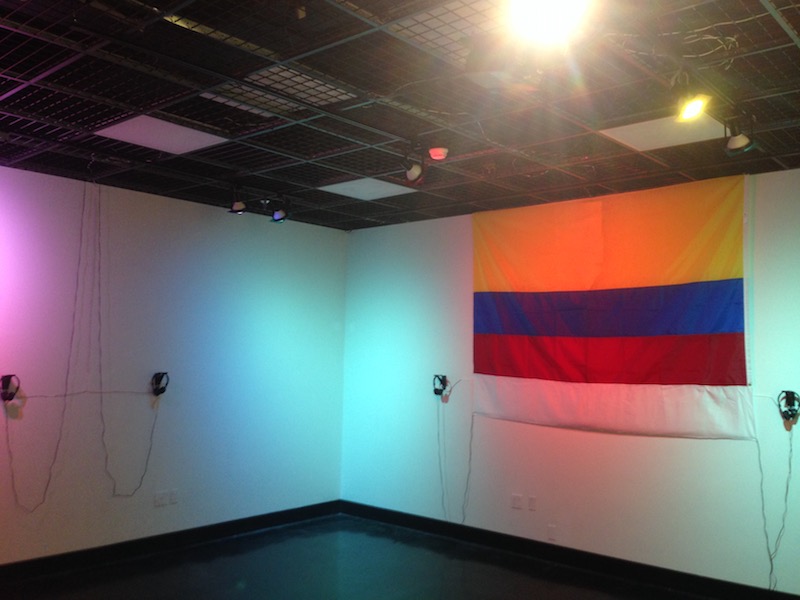 Colombia Inmarcesible is an immersive, sound installation that aims to create social awareness about the latest socio-political events that happened in the world, particularly in Colombia. After more than 50 years of civil war between the government and the rebel guerilla FARC, they finally agreed to start peace talks which led to a final peace agreement signed on November the 24th, 2016.
Even if the peace agreement was signed, not all the society is willing to accept this agreement and are reluctant about allowing former guerilla members back into civil society. This is mostly the privileged people that gets socio-economic benefits from war and ironically has never hold a rifle or sent their sons to war. To represent these different perspectives three scenarios are reconstructed from binaural field-recordings using a custom-made Dummy-Head.
On one hand, there is the life in the city which alienates most of the people that lives inside them from the rural world which is the biggest part of the country. Very loud sonorous objects contribute to the sound pollution of the city. Next, we have the soundscapes from the rural countryside in which a lot of natural sound objects can be perceived allowing to create a more calm and serene experience.
Finally, there is the war soundscape created by the intersection of synthesized sounds such as machine guns and helicopters, mixed with the same sounds of the countryside but this time just witnessing all the destruction that is occurring in the foreground.
My idea with this installation is to reveal three different types of realities that people in Colombia experience daily, through the recording of binaural soundscapes that represent each one of those scenarios. As users enter the space they see a Colombian flag in the front wall with two headphones per wall that are constantly playing back soundscape compositions for each one of the different scenes: city, countryside, and war. Each wall has two ultrasonic sensors to detect users that are approaching the headphones and control the volume of the piece depending on their distance from the wall.

Born in Bogota, Martín Vélez lives in Los Angeles area. His first musical experiences came from playing in rock, metal, and jazz bands. Martin’s work focuses in creating socially meaningful artistic statements by combining music, sound, science and technology into one single interactive experience. His installation works have been presented in several art galleries in Los Angeles and Bogota. He has executed live performances and studio productions going from experimental biofeedback music to jazz, rock, metal, traditional Andean music amongst others. His latest works aim to create social consciousness and self-awareness within the audience, both at a personal, social, and environmental level.
Martin holds a Bachelor of Music in Music Theory and Sound Engineering from the Pontificia Universidad Javeriana in Bogota, and recently finished his Master in Fine Arts from the California Institute of the Arts in music technology with a thesis in biofeedback music under the tutelage of David Rosenboom.

Colombia Inmarcesible was installed in the WaveCave from February 13th to February 20th, 2017.