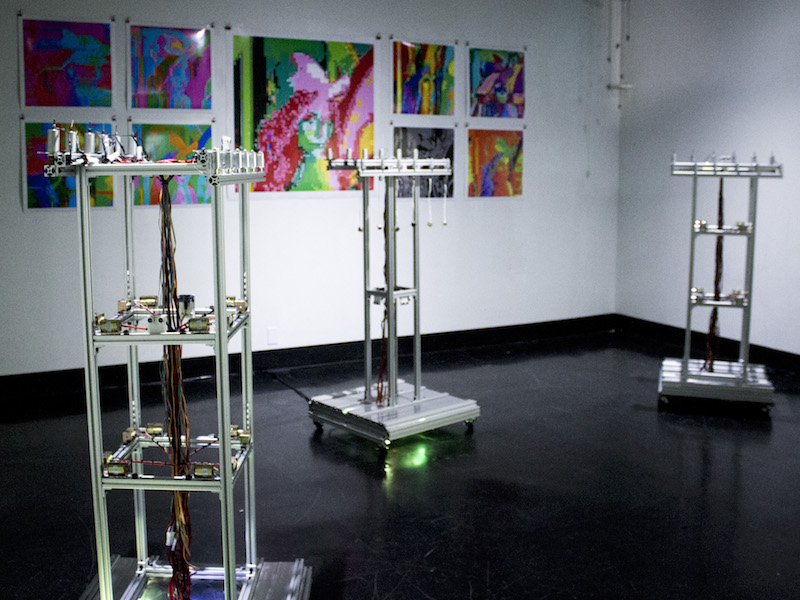 No Humans Allowed forms a community of automated robotic entities which reside in the gated WaveCave gallery. The robots are xenophobic: reacting to outsiders via paralysis or violence. When the presence of a human is detected, the community’s productivity breaks down as the mechatronic individuals are no longer able to function harmoniously. The result is a hostile space where outsiders are unable to enter without being attacked or shunned by the robotic society.
Each of the three mechatronic sound sculptures, or mechatronic personalities, are constructed from extruded aluminum, acrylic, ultrasonic rangefinders, solenoids, and LEDs. The ultrasonic rangefinders allow each personality to independently detect the presence of any guests in the gallery. When no outside presence is detected, all members of the community are active and productive while the presence of a human, or other, disrupts the society. If the outsider ventures too close to any personality, they will either become paralyzed by hate and fear, and turn off, or attempt to “violently” deter the intruder with loud, abrupt, a-rhythmic noises. Either way, the personality is so preoccupied by the existence of the other it no longer actively contributes to society and can even reduce the productivity rating of other bots residing in the community. By endowing these situations, No Humans Allowed hopes to shine light on the danger of xenophobic other thinking that is common in the zeitgeist. With the rise of mechatronics, robotics, machine learning, and artificial intelligence (AI) questions of artificial morality are no longer topics for future generations. Do we want our robotic children to exhibit violent, isolationist, bigoted tendencies or do we want them to be accepting, loving and caring to all other forms of life and intelligence?

Nathan Villicaña-Shaw is a mechatronic sound sculptor, experience designer, composer, and new media installation artist whose work complicates, simplifies, and examines our interactions with electronic technology. Interested in defining new boundaries for human-circuit interaction, his installations and hardware interfaces blend hardware hacking, electrical engineering, computer science, and mechanical engineering to create unique interactions which invite us to question our relationships with electronic devices. By designing and programming his own hardware, Nathan is able to create unconventional interactions between humans and circuitry by removing unnecessary abstractions which separate our bodies from the electrical systems we are affecting.
In addition to creating novel hardware interfaces and interactive installations, Nathan is a composer of experimental music for human-mechatronic ensembles. Interested with the interactions between robots and humans onstage, as much as the sounds they produce, Nathan’s compositions strive to tell stories while sonically maximizing the potential of both its human and robotic performers.

No Humans Allowed was installed in the WaveCave from May 1st to May 8th, 2017.