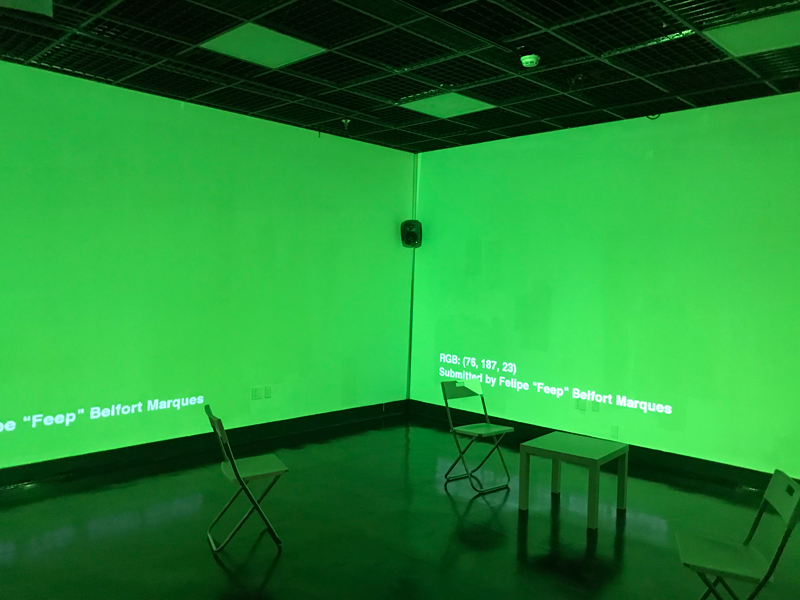 Our Color Green, Part 1 was an installation that took place the week before St. Patrick’s Day in 2019. Based on the notion that everyone associates the color green with different things and that no two peoples’ definition of the color were the same, the installation aimed to form a comprehensive definition of green by having people submit sounds which they associated with green as well as a shade of green which they thought best represented said sound. The installation would then show these sounds and shades one by one in the WaveCave, resulting in a room visually and sonically bathed in green.

Brandon Chang is a composer hailing from West Linn, OR and a second-year MFA candidate at CalArts. He began studying music via group piano lessons at a young age and proceeded to spend most of his adolescence studying cello. His discovery of the video game Guitar Hero III: Legends of Rock, however, inspired him to begin writing his own music and eventually study composition at Boston University, where he earned a bachelor’s degree.Brandon typically abides by a rule of doing anything necessary to realize a concept; however his output tends to take the form of text instructions, computer programs and/or highly melodic pieces inspired by post-rock, vaporwave and Midwest emo. Conceptual interests of his include food, power structures within music and society, and his favorite color, green.