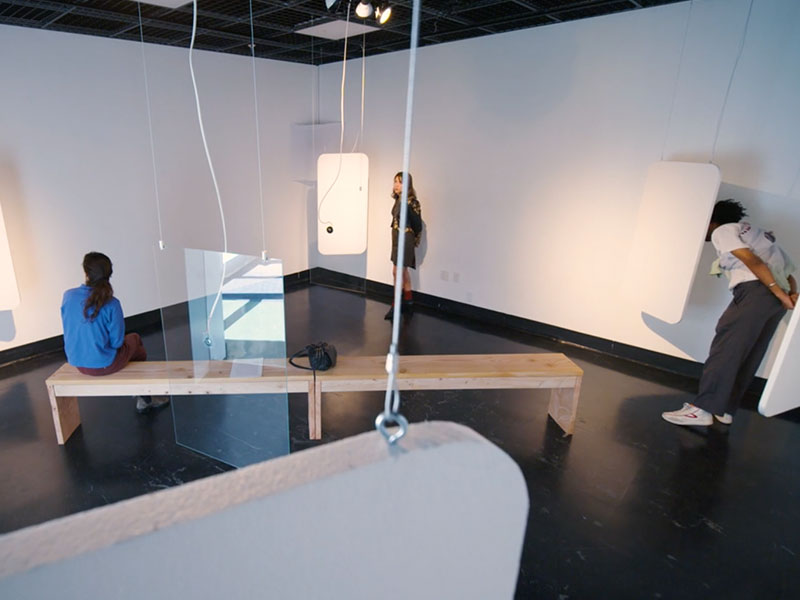 A multi channel musical composition with a speculative fiction narrative for eight flat panel speakers made from styrene and plexiglass.

Collective Phantom Ring, an 8-channel musical composition and speculative fictional narrative for flat panel speakers, is an exploration into layering states of listening, merging temporal structures and composing in collaboration with the listener.

In an interview, Pauline Oliveros posited a definition towards her idea of an “androgynous music” as inherently possessing simultaneous dualities: “[an androgynous music] would certainly be in the deep structure of how the music is played and assembled. You can have music as a linear process, and music as a nonlinear process. And then you can also have music that’s both, and that would probably do it.” (“A Conversation About Feminism and Music: Pauline Oliveros, Fred Maus.” 1994.) This musical installation aims to achieve a ‘musical androgyny;’ instead of being linear or nonlinear, but both, and the generative product of the two.

In my experiences sharing music online I am always aware of how little control I have over how it is heard. Streamed or downloaded, the music may be heard through computer speakers, a car stereo, earbuds, or a smartphone speaker, and most likely functions as background music to aid in an activity. The famed record producer (and murderer) Phil Spector disdained stereo channel mixes, as he felt they gave the listener too much control through their choice of speakers and placement. Instead, he favored the mono mix: many channels dubbed down to one track to ensure listeners would hear exactly what he intended. Today, with mp3s and streaming, it is futile to attempt to control how a listener will experience music. This installation is a type of anti-mono mix, exploring the limits of relinquishing control to the listener. The listener chooses the duration and their spatial orientation and movements determines the mix: there is no singular way to listen.

The ubiquity of earbuds and headphones in public spaces has produced a cultural norm of customizing any experience with a personal soundtrack. Algorithmic playlists, adapting to individual interests and behaviors, have yielded what the writer and music critic Ben Ratliff calls “bottomless comfort zones.” The endless stream of music, podcasts and media enables their seamless continuity as a tool to aid in any activity: driving, eating, exercising, walking, shopping, cleaning, cooking, working, relaxing, etc. Large scale ‘soundmarks,’ such as a town’s church bell, have been crowded out by the individualized bursts of notifications and alarm sounds. This installation aims to layer the resulting states of listening: following language and narration, awareness of background music, durational pattern recognition, anticipating bursts of notifications and alarms, and lastly the projection of sounds, or the perception of ghost sounds or sonic hallucinations based on expectation.