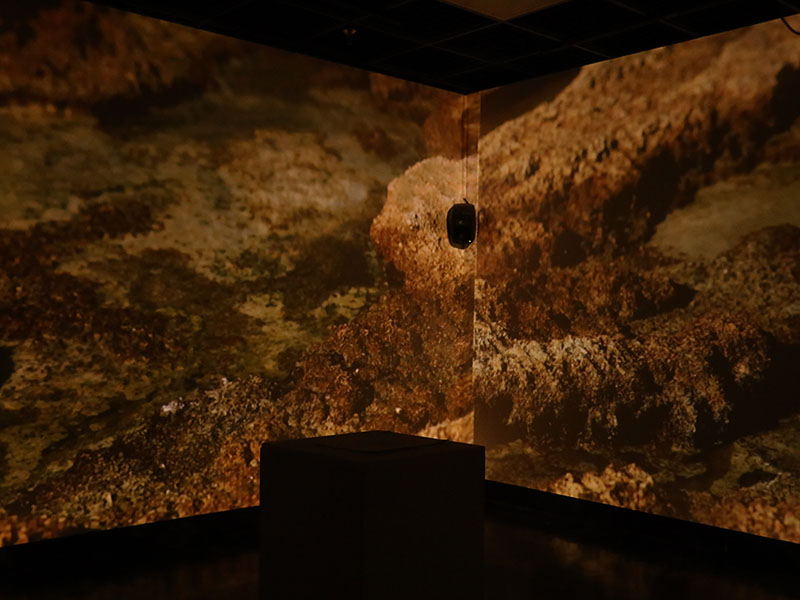 Proportions of time is an installation consisting of a 109 hours of 4-channel audio made on the Buchla Music Easel, and a video filmed around the Salton Sea. The Salton Sea lies in the middle of the desert and came to be after a 2 year long flood from the Colorado river in 1905. Before that the dry basin was used for salt mining. In the 50’s and 60’s it was a popular vacation resort, lots of RV-resorts and motels with cheesy exotica themed names like Bombay Beach and Mecca. It has also been an very important stop for migrating birds in the Western Hemisphere and a popular recreational fishing destination. But because it’s a terminal lake (no outlets) and very little fresh water flow into it, plus toxic runoff from nearby farmland in the Imperial Valley, it’s slowly shrunk and gotten more and more salty, right now the salinic level is about twice as the Pacific Ocean, and the concentration increases with about 3 % per year. The last 20 years there has been a mass death of fish and birds. 150,000 eared grebs died in 1992 alone. 7.6 million tilapia died in a single day in 1998.
It’s a modern ecological disaster. But in the 1600’s Native Americans told European settlers about a lake that used to be in that area. For thousands of years, the Colorado river has alternately flowed in and out of the valley, alternatingly creating a freshwater lake, an increasingly saline lake, and a dry desert basin, depending on river flows and the balance between inflow and evaporative loss. The cycle of filling has been about every 400–500 years and has repeated many times. This piece is loosely representing this 500 year cycle in 5 days and is about geological time as well as the insignificance of being human and our limited modes of perception.

BIO
Aron Dahl (they/him) is a Norwegian composer, singer, sound synthesist, videographer and performer based in LA. His music is a genre defying mix of analogue synths, field recordings, techno beats and nativistic pop, encompassing themes of identity, alienation, BDSM and transcendence. His debut album «Loosening Orion’s Belt», released under the name Danielle Dahl, was awarded by the Danish Arts Council as one of the 10 best releases in 2018. Dahls live show has been described as a shamanistic ritual by Hans Joachim Roedelius, or as an artistic boxing match with the self. Dahl has toured in Europe, Japan and North-America with the free jazz trio Tigers Mind and as a solo artist. Their music has been featured in The Wire, Politiken, Passive/Aggressive, I Care If you Listen, LA Weekly as well as a number of underground zines and blogs. Aron Dahl has released 3 full length albums, several cassettes and a 10’’ with weirdos like Daniel Lercher and Lumpy Space Princess, Tigers Mind and bravura in the face of grief. He founded the Copenhagen-based label Abstract Tits and has curated concerts and performances at the legendary Copenhagen venue Mayhem since 2014. Aron Dahl is currently pursuing a double major in Film/Video and Experimental Sound Practices at California Institute of the Arts on a Fullbright Fellowship.