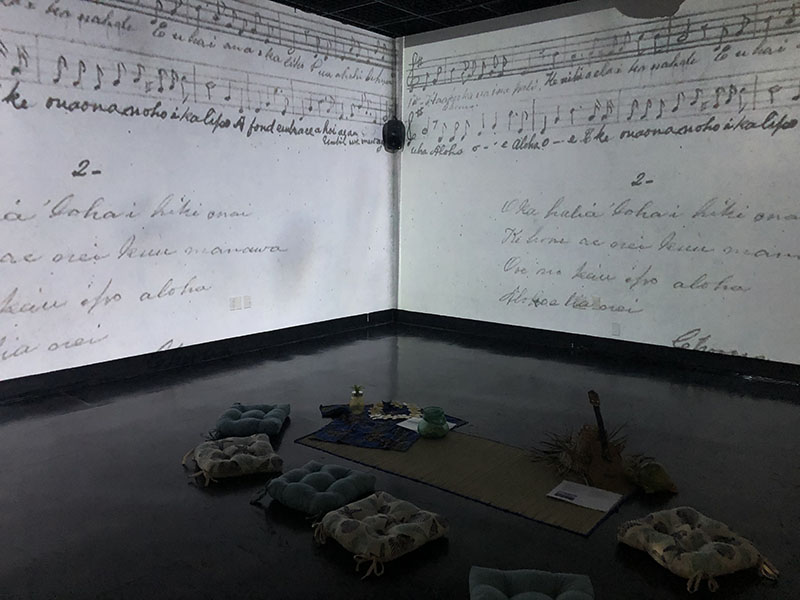 This eight-minute installation took audiences on a journey of Hawaiian music: from the earliest documented music to the popular Hawaiian music of today. Visuals shown were the historical locations of which the music was practiced, and musical icons that shaped the sound of that era. The beginning starts off with Hawaiian chant and an ancient hula tradition called Hula Kahikō. Then it follows into kī hōʻalu (slack-key guitar), Queen Liliuokalani’s famous song “Aloha Oe”, post-U.S. annexation music (including American-influenced “Hapa-haole [half white, half Hawaiian]” music), the Hawaiian Renaissance Revival, and current popular music of Hawaii: Hawaiian reggae music. The installation ends with an international icon for Hawaiian music: Israel Kamakawiwo’ole.

J.Lyn Vera is a singer, composer/ songwriter, and producer from Honolulu, Hawaii. She has an associate’s in Music Business from Honolulu Community College’s Music and Entertainment Learning Experience Program and has worked behind the scenes of Hawaii’s entertainment industry, doing PR and marketing for various clients of Hawaiian entertainment, music brands, and musical artists such as KoAloha Ukulele, Patrick Landeza, and Billy V. She is also a scholarship winner of the Hawaii Songwriting Festival, a finalist for Hawaii’s Youth Exchange competition at 9 years old, and was an active singer in Hawaii, singing with Hawaii’s biggest entertainers such as Wade Cambern from Hawaiian style Band, and has performed in events such as Ekiden Marathon and Music Festival in 2017. Currently finishing up her Bachelor of Fine Arts Degree in Musical Arts at CalArts, J.Lyn hopes to spread world music and culture (especially Hawaiian music) internationally with her own pop music.