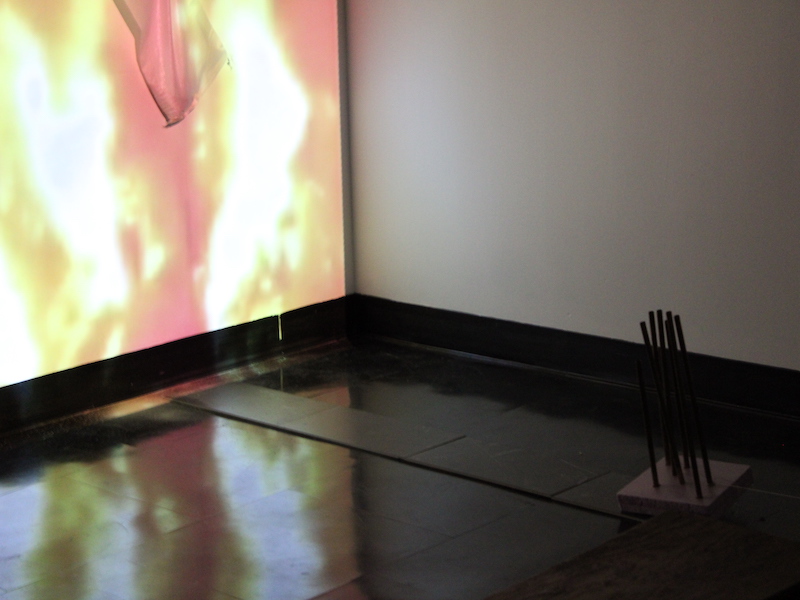 Structure fire is a meditation on semantic mediation, utilizing translation through mediums as a way of non-semantically approaching identical information. The core of the sound is intuited by the artist and translated to text and video. In this iteration, the video and sound are translated into objects that, while non-kinetic assume motion and thus audiation through their tensions. “Structure” is a approximation of a high school physics textbook’s problem involving pulleys, bags of sand, and a mass of copper potentially being scrapped across tile. The onus is on the audience to audiate the sound potential in the objects, similar to the intuiting of the core philosophy of the sound score or the video work. “Fire” is a ream of white neoprene upholstered into the wave cave wall. In low light, perhaps the wall has distorted itself into masses and tumors, collapsing upon the view and upon closer inspection, the materiality and construction echos Structures elastic tensions with dowels of wood being carefully balanced to produce the shape similarly creating a stretched skin, evocative of a sounding medium. The objects are in obvious conversation with the video work “Structure Fire” displayed on the left facing wall, mostly text, with occasional stock photography and the sound score, mostly extreme vocal work, feedback, with occasional major chords sounded at a distance on a piano.