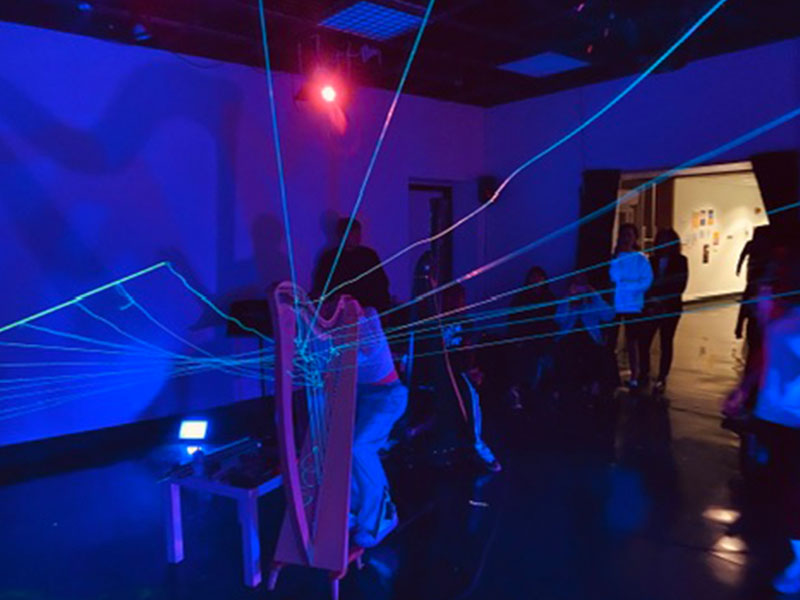 Amplified Harp and Effect Pedals: Create your own electronic sounds by pressing with your feets on the different buttons of the pedals effects that are on the floor.

The shadow theater of your own body moving
While you create your world of sounds with the fishing lines and the prepared and electronic harp, the UV dark lights (on the floor) project against the walls the shadow of your body. Create your own shadow theater by moving your body while you produce your universe of sounds !

The projected images on the wall
Go to the overhead projector that has two pieces of glasses on it. Those glasses are full of a mix of water, mineral oil and colorants and when you press the two glasses together, it create beautiful moving images projected on the wall.

About the artist and his collaborators
Pierre Emmanuel Mariaca : is a Swiss-Canadian composer and multi-instrumentalist based in the Los Angeles area who often collaborates in interdisciplinary projects with dancers, actors and visual artists.
Herry Kim : is an artist based in Seoul and California. With painting and sculpture background, she is now making robotic sculptures and absurd videos. Her main interests are technology, marketing and human interaction.
Ruoyi Shi : is a sculptor and a film maker from China. She studied sculpture in Central Academy of Fine Art (CAFA), China. She is interested in how different languages operate in different areas in the world and developing her own narrative.
Dongpu Ling : is a Shanghai-born, Los Angeles-based Intermedia artist. Sparked by a fascination of technology, she explores individual identities, cultural histories and future innovations, using each work as a medium of inspiration and awareness.