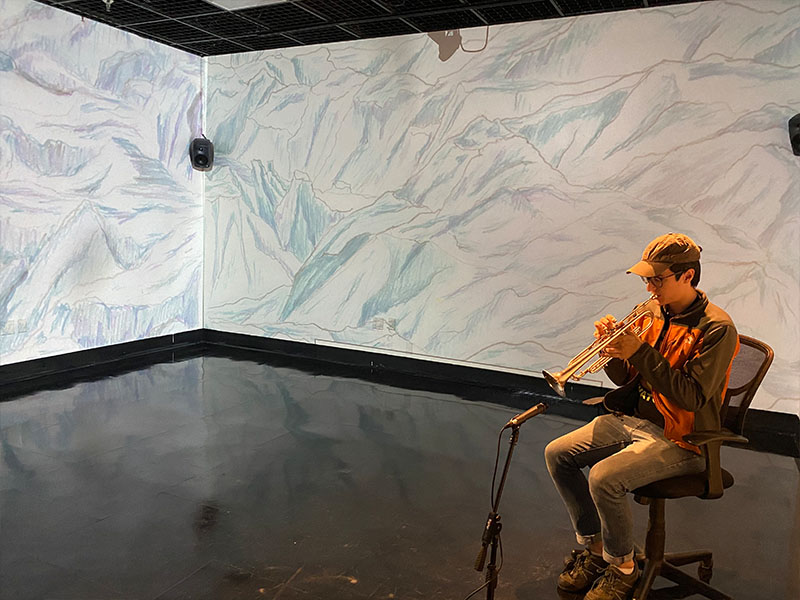 Offerings to the glacier may be made using the microphone inside. A loud sustained sound will affect the sound design.
Large chunks of ice that break from the side of a glacier become icebergs. These icebergs float through the ocean and melt.
This piece is in memory of the largest glacial calving event ever caught on film. While documenting the Jakobshavn Glacier in Greenland, the crew of Chasing Ice captured a portion of ice the size of Lower Manhattan breaking off into the ocean. The event lasted over an hour.
The Jakobshavn Glacier alone accounts for 10% of Greenland’s icebergs. The melting of icebergs like these is the driving force of sea level rise worldwide.
The sound design you hear is made up of a variety of recorded objects. They include a dumpster, an airplane, a sink, a plastic bin, an escalator, and an electric guitar.

Artist Bio:
Jake Sucher is a Los Angeles based guitarist, composer, and educator. As a composer, his work for film was featured two years in a row at the CalArts film showcase at REDCAT in downtown Los Angeles. In 2015, Jake was invited to participate in an artist residency at No Lugar Arte Contemporáneo in Quito, Ecuador where he collaborated with artists from around the world and premiered original composition and sound design.
Originally from Chicago, Jake attended California Institute of the Arts Herb Albert School of Music where he graduated with a Bachelor of Fine Arts in Jazz Studies. Currently he is pursuing his Masters in Performer/Composer at CalArts.
http://www.jakesuchermusic.com