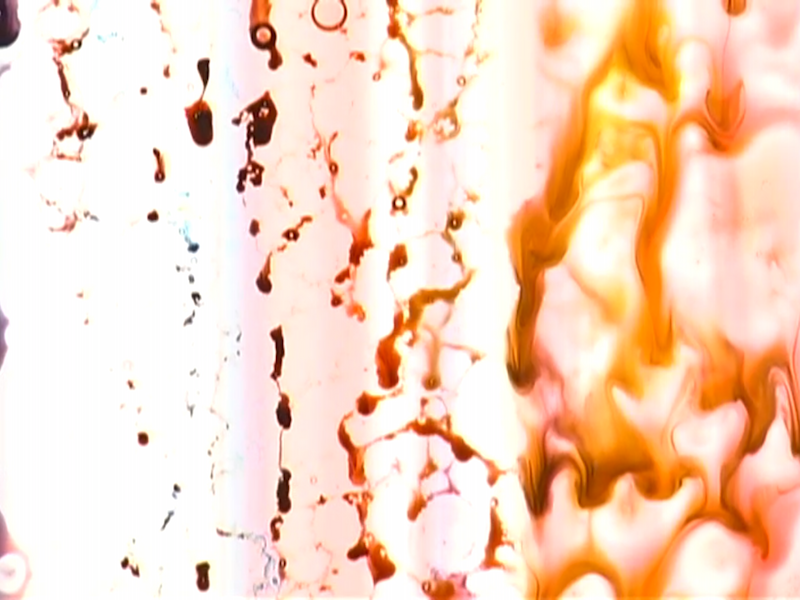 Colours/After Death is a video and sound piece that was presented on a loop in the WaveCave from November 22nd to December 2nd, 2015.

And there was silence.

And again we asked the question.

And the answer came: You believe that by asking questions you will receive answers. But often answers are not understood; they merely cause more questions. And many enigmas have no solutions. But I shall entertain three final questions from you, and if you do not understand my answers I shall clarify nothing, for I shall not be here.

And we asked: What leads to death?

And the answer came: Life leads to death. For everything that lives must die. That you can escape death is an illusion. The entrances to death are many and disparate. That you have control over how you meet death is also an illusion. For death may come quickly or slowly. But often, as you are converted to death, for there is no greater transformation than from life to death, you will recall your life and how it has led you to this final moment.

And we asked: What is death?

And the answer came: Death is the absence of life. As the point of living is to live, so the point of dying is to die. Yet, as life has its stages, so does death, and the colonies of living things that constitute you subside each in their own fashion until all have passed. When this is done, you are complete and at one with the universe.

And we asked: What is after death?

And we asked: What does this mean?

And there was silence.

Francesca Penzani started her dance training at the London Contemporary Dance School and came to CalArts on the first exchange program between LCDS and the CalArts School of Dance. Penzani started her video work at The Place Theater in London in 1990 as camera operator, editor and director for live performances. In 1991, the Arts Council of Scotland selected her for residency for Choreographers and Composers. In 1992, the Arts Council of England and BBC2 awarded Penzani a training-ship in Dance for the Camera. In 1996, she was the assistant to director/choreographer Lloyd Newson of DV8. Her video and dance work has been shown at international dance and camera festivals in London, New York, Buenos Aires, Atlanta, Duke University, at the American Dance Festival and on the Web.

Barry Schrader (born Barry Walter Schrader, June 26, 1945, Johnstown, Pennsylvania) is an American composer specializing in electro-acoustic (primarily electronic) music. His compositions for electronics, dance, film, video, mixed media, live/electro-acoustic music combinations, and real-time computer performance have been presented throughout the world. Schrader has been acclaimed by the Los Angeles Times as “a composer born to the electronic medium”, named “a seminal composer of electro-acoustic music” by Journal SEAMUS, and described by Gramophone as a composer of “approachable electronic music with a distinctive individual voice to reward the adventurous”. “There’s a great sweep to Schrader’s work that puts it more in line with ambitious large-scale electronic works by the likes of Stockhausen (Hymnen), Eloy (Shanti) and Henry (take your pick), a line that can be traced backwards to Mahler, Bruckner and Beethoven.” writes Dan Warburton of the Paris Transatlantic Magazine. Computer Music Journal states that Schrader’s “music withstands the test of time and stands uniquely in the American electronic music genre.”
Schrader began composing electronic music in 1969 while a graduate student at the University of Pittsburgh, where he was also organist for Sunday high mass at Heinz Chapel. He graduated with an MA degree in musicology and then went to the newly formed California Institute of the Arts in Valencia, California, where he received an MFA in composition in 1971. He was appointed to the School of Music faculty of CalArts in 1971, and has been on the composition faculty ever since. He has also taught at the University of California at Santa Barbara, the California State University at Los Angeles, The University of Nevada at Las Vegas, and Beijing Central Conservatory.
Active in the promotion of electro-acoustic music, Schrader is the founder and the first president of SEAMUS (Society for Electro-Acoustic Music in the United States). He has been involved with the inauguration and operation of several performance series such as SCREAM (Southern California Resource for Electro-Acoustic Music), the Currents concert series at Theatre Vanguard (the first ongoing series of electro-acoustic music concerts in the U.S.), and the CalArts Electro-Acoustic Music Marathon. He has written for several publications including The New Grove Dictionary of Music and Musicians, Grolier’s Encyclopedia, Contemporary Music Review, Journal SEAMUS, and Computer Music Journal, and he is the author of the book Introduction to Electro-Acoustic Music. In 2014, Schrader was presented with the SEAMUS Lifetime Achievement Award.