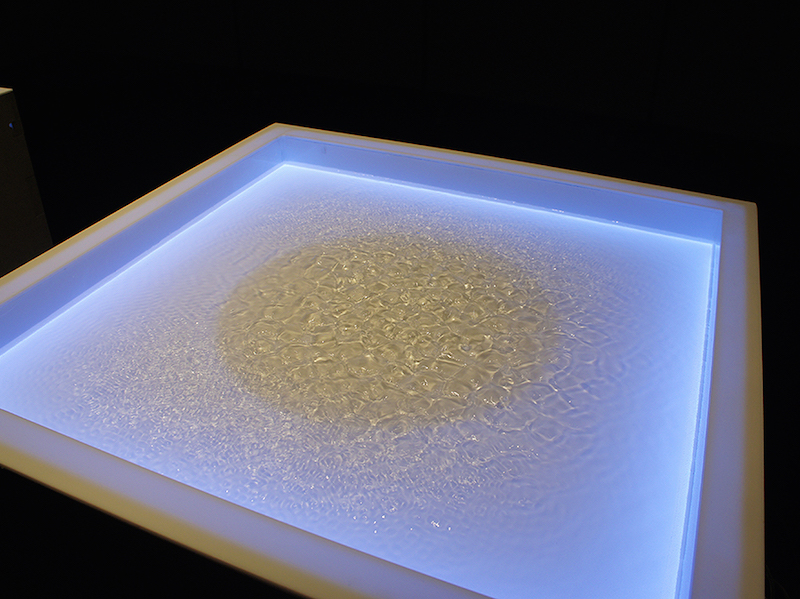 node is an immersive interactive real-time installation that focuses on visualizing sound waves through a liquid medium, in this case, water.  When sound is passed through a physical excitatory medium such as water, the relationships between minimum and maximum displacement are made visible and complex patterns emerge.  This installation utilizes four large white birch plywood cubes set up in a row.  Embedded inside each cube is a 10” subwoofer and amplifier.The top section of each cube is surrounded in 1/8” white acrylic which holds 2” of water.  Hidden within grooves of the plywood just below the acrylic are rows of white leds.  Additionally, there are two ultrasonic sensors embedded on the outside of each cube, one on either side.  Cube #1 contains an Arduino mega 2560 micro-controller that handles the sensor data and controls both the leds and the amplitude of the sound waves.

When a visitor approaches a cube, the cube activates and will begin generating a low frequency waveform.  As the sound fades in, complex fractal patterns start to form in the liquid.  The person’s distance from the box dictates the frequency and harmonics of the sound, which, in turn, effects the patterns in the water.  If the person gets closer to the box, the sine wave morphs into a more complex waveform and starts to self-modulate. The cubes are all linked together, so if another person stands in front of a different cube, both cubes start modulating each other.  This is conceptually linked to the use of “operators” in fm synthesis.  Each cube functions as an operator and can modify another based on how many people are in the space.  The more people in the space, the more active and complex the sound and visual patterns.  Additional sound comes from 8 custom satellite speakers placed on either side of each cube which gives the viewer an audio range interpretation of the low frequency sounds being created by the subwoofers.  All of the sounds are generated using Chuck programming language and Native Instruments Reaktor software.

The purpose of this installation is to show clear relationships between acoustic signals and the visible patterns being created.  We typically view sound in very limited ways, primarily with graphing/signal analysis software that is only meant to be “representative”.  This piece allows us to view what sound actually looks like and get a sense of the complexity of physical and mathematical relationships that are fundamental in nature.