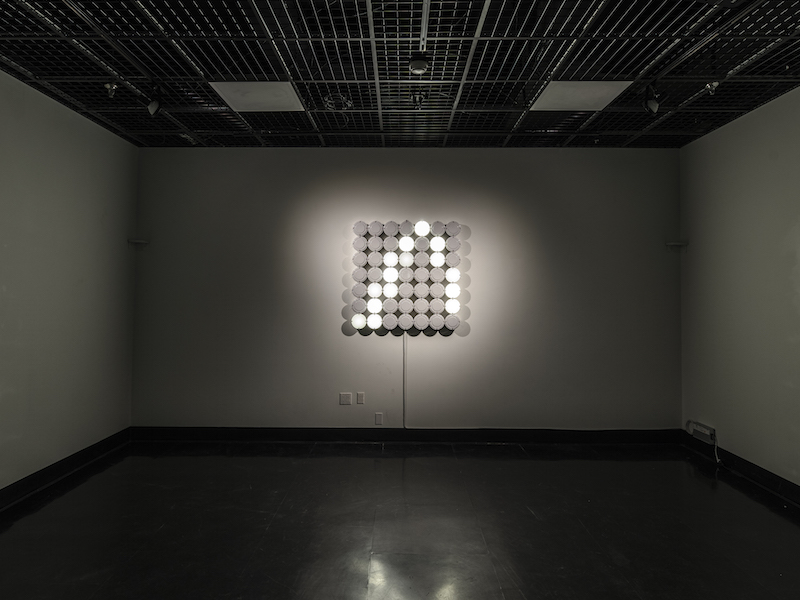 Giant Spectrum is an interactive audio-visual piece that displays a live, moving spectral representation of the sounds it hears. Much like light, sound is comprised of many different frequencies, and different sounds contain changing frequencies with varying amplitudes. As sounds occur, the piece shows these changing parts in real time as a moving spectral display. Any sound present in the room appears on the display. Giant Spectrum was constructed over a four month period from December 2015 to March 2016, and is made of aluminum, polycarbonate, and custom electronics.

Cooper Baker is a sound artist living in San Diego, California. He regularly plays experimental music at venues along the west coast and his artwork has been exhibited in galleries and publications throughout the United States and abroad. Originally from Los Angeles, he moved to San Diego to attend the University of California San Diego where he earned his Ph.D. while studying with Miller Puckette, Tom Erbe, and F. Richard Moore. Prior to enrollment at UCSD he taught at California Institute of the Arts, where he also received his MFA in experimental composition and finished his BFA in music technology. While at CalArts he refined his artistic practice and began incorporating new and experimental electronic media in his artwork and music practice, under the guidance of Morton Subotnick, Mark Trayle, and Barry Schrader.