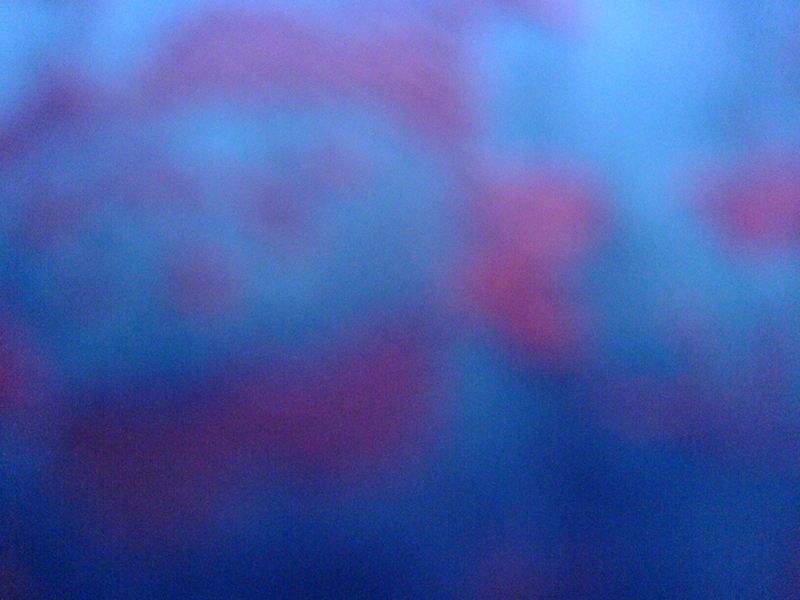 Oberflächen (Surfaces) deals with various aspects and varieties of surface textures, their abstraction and sensuality. It discussed various grades of alienation and abstraction by looking at surfaces from a different point of view.

The visuals
Projection
The installation has two full-wall-sized projections of extremely close up surface photography, revealing the varied texture and colors of seemingly smooth surfaces, creating something that looks like blurry abstract paintings.

Objects
There are object hanging from the ceiling of the room:
vinyl records, sand paper and bubble wrap—these are all surface-only objects with no ‘content’. There also is bubble wrap on parts of the floor of the room and an armchair in the middle of the room to sit down.
Vinyl: in order to listen to vinyl we normally scan/scrape its surface with a needle.
Sandpaper: is a thin layer of ‘sand’-texture on a piece of paper.
Bubble wrap: is all-surface with no content; take the air out and you are left with a surface-foil.

Interaction
This is in addition to the ongoing audio distribution.
The sand paper can be used to scrape the records in the installation.
The bubble warp can be use to pop and create rhythmic textures.
If you want to sit in the chair, you have to walk over bubble warp as well.

The audio
is two-part:
First there is a 6-part Just Intonation sine wave chord slowly, but constantly and randomly, changing using partials 1-64. It is like zooming in very closely into an instrumental tone and looking at various aspect of its harmonic structure.
Then there are pre-recorded surface sounds: table tops, textile, carpet, etc.

Ulrich Krieger
is a German composer and performer living in Southern California.

His compositional approaches include micro-sounds, microtones, just intonation, ‘instrumental electronics’, drone, and noise. His main compositional interest and research over the last decade was in ‘instrumental electronics’, creating music using sounds produced by extended techniques on traditional instruments, which are reminiscent of and influenced by electronic music.
Amplifying instruments in elaborate ways, he gets down to the ‘grains of the sounds’, changing their identity and structure from within. This lead him to transcribe and arrange Lou Reeds ‘Metal Machine Music’ for chamber orchestra.

Krieger studied classical/contemporary saxophone, composition, electronic music, and musicology in Berlin and New York. As composer and performer he worked in Europe, the Americas, Asia and Australia.

Ulrich Krieger is professor for composition, Experimental Sound Practices and rock music at CalArts, where his special field is the cross-pollination of experimental music and avant-garde rock.

Oberflächen was installed in the WaveCave from November 21st to December 5th, 2016.