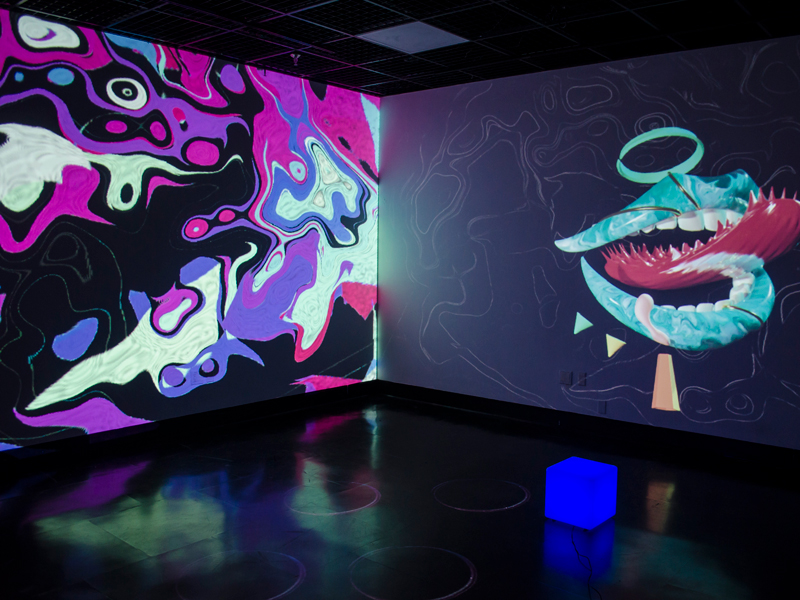 IMUU (Weilu Ge x Kelon Cen)
Abstract: Bubble fiction is an interactive installation. The audience are invited to explore an imaginative and immersive space by following the trace of an interactive “bubble” cube. It uses a webcam and a contact transducer as input devices detecting the color and movement of the object in order to control both the image and sound. Through the four different scenarios of the two anthropomorphic body parts, Eye and Mouth, Bubble fiction depicts the state of speaking (output) and seeing (input), chaos and tranquility in the context of fast-paced social media. Through this piece, the authors try to explore the theme of social interaction and the musical meaning in constructional noise.

IMUU is an artist collective imagining their lives in a futuristic dystopia and using light as paint, music as words to create an episodic narrative. The team consists of animator, composer, and interactive creative director doing experiments in creative expressions via VR/AR, interactivity and performance in transformative physical or virtual spaces.

Kelon Cen has worked in many forms of media, from traditional academic art paintings to digital 2D/3D animation. He has explored animation in film and digital forms along with its integration into video installation, dome and theater projection.
“Fluidity” is the word to describe his mastery of the smooth lines in his calligraphy and paintings, the animation of metamorphosis and body movement, and the sound-driven editing. His works are influenced by surrealism and have been exhibited in various festivals including Electronic Language International Festival in São Paulo, Animamix Biennale in Hong Kong, etc.

Weilu Ge is an electroacoustic composer and intermedia artist based in Los Angeles. She works with various media forms from concert music to innovative technology. Weilu’s work often involves collaboration with visual artists working in light, video, painting, photography, and other mediums. Since 2015, she has focused her studies and career on experimental and intermedia music theater in the role of a Composer-Director, exploring the potential of sound as the medium that integrates other art forms and helps create a comprehensive artistic expression. Weilu’s works have been influenced especially by Musique concrète, German traditions of sound art and the notion of Gesamtkunstwerk, which guides her exploration in the concept and layout of space in theater.
Weilu’s works have been presented at the Shanghai New Art Festival, Shanghai International Art Festival in China; SEAMUS conference & concert series; NYCEMF New York City Electroacoustic-Music Festival; Seoul International Computer Music Festival, etc. She is currently pursuing her InterSchool MFA in Composition & Experimental Sound Practice/Art and Technology with a concentration in Integrated Media at California Institute of the Arts. Weilu holds a master’s degree in computer music composition from Peabody Conservatory of Johns Hopkins University as well as a Bachelor degree from Shanghai Conservatory of Music.