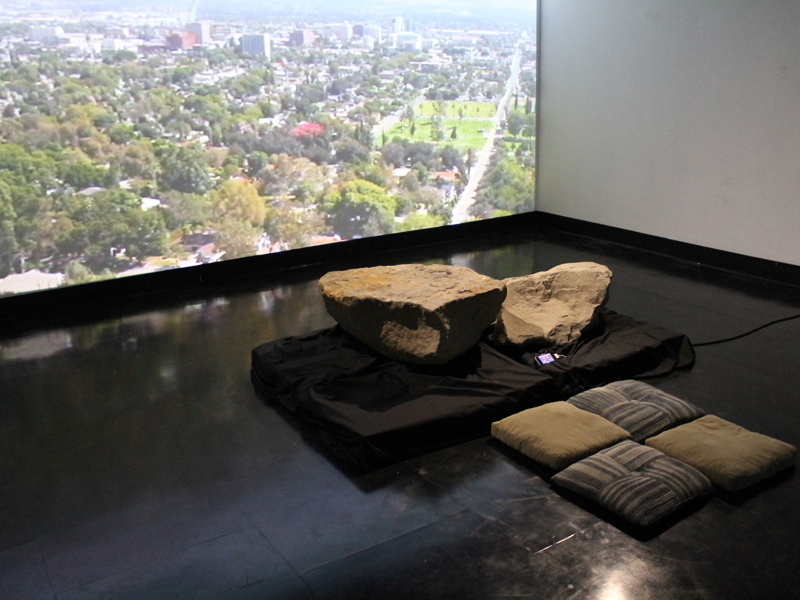 This installation invites you to attempt to listen and engage with the two large rocks placed inside. Once inside, please take a seat on the cushions facing the rocks. press the “start” button on the interface to begin the exhibit. Feel free to use the “mute rocks” and “mute environment” buttons to more fully realize the sonic happenings. When you are finished, you may press the “stop” button, or simply exit the space.

I designed this piece as a direct response to Yoko Ono’s “Earth Piece.” In the score for her work, she instructs the participant to “listen to the sound of the Earth turning.” Taking this instruction as directly as possible, I set out to make recordings of Earth, or more specifically, recordings of rocks. I used a Zoom H4n with two contact microphones to gather the material. I used adhesive to adhere the contact microphones to the rock, while using the Zoom onboard microphones to capture the sounds of the environment. While making these, I happened to capture a small seismic event, which is what you can hear featured inside. Once the piece is started, you will hear both the sound of the environment and the rock played simultaneously. The low frequencies from the rock have not been treated, neither have the environment sounds. When the sound of the rocks reaches a threshold, the video is downsampled accordingly. This allows for a visual representation of the vibrations that caused the rocks to sound.