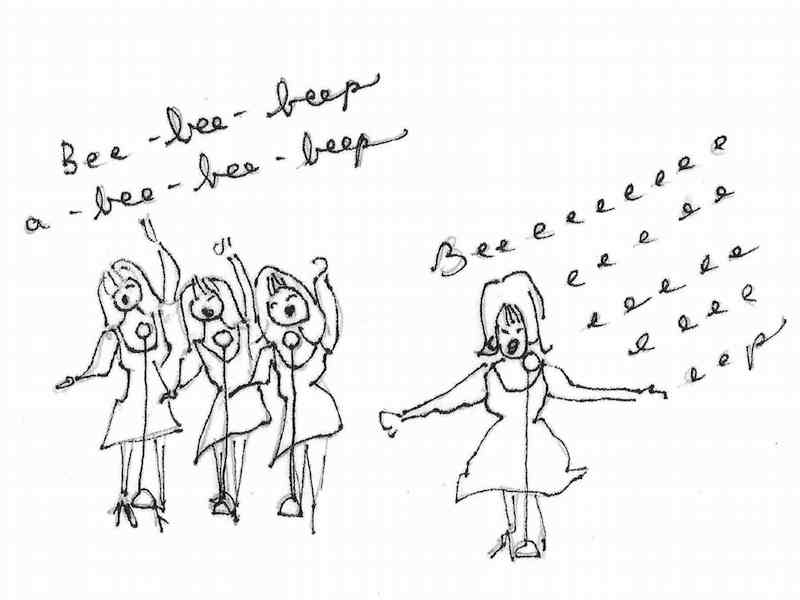 For many years, I have been making drawings and using them in performance lectures about linguistic, neuroscientific and historical topics that relate to language and music. With this new collection, Beep, I am for the first time sharing drawings outside the context of a performance. There is at least one beep in each drawing, and while some of those beeps reference literal beeps or other beep-like sounds, other beeps cross over into the metaphorical. Anything is beep. All is beep.
The beep has great personal significance, but I do not like the beep. Beep is annoying. About ten years ago, I started finding that I could make bad memories evaporate from my mind by making a little sound. This sound would be a certain word. The word changes over time, but they are all annoying words, I have no control over this. Yet, I am grateful to them. So, the energy that went into making the beep drawings was fueled by the emotional charge that the beep has for me. Historically, I say these words only in secret, but ever since I have drawn these beeps, the beep has started to escape into the world. More and more, I find myself saying beep as a shortcut when I vocalize in ritualistic or emotional cases that aren’t reliant on semantics, such as expressing greetings, agreement, excitement, etc. It turns out that, a lot of the time, we don’t have to actually say the words we mean, beep is enough.

Laura Steenberge is a performer, composer and scholar, based in Los Angeles and the Bay Area.
Her work explores connections between language and music, informed by studies of harmony, acoustics, linguistics, mythology, ritual and perception. As a performer, she sings and plays viola da gamba, contrabass, piano, guitar and other things, in traditional and untraditional song styles. As a composer, she primarily writes vocal music. As a scholar she is currently researching text setting practices in medieval Byzantine chant.
Laura’s music and performance lectures have been presented in numerous concert and site-specific venues, including the wulf., Redcat, the Los Angeles County Museum of Art, the Hammer Museum, the Sutro Baths, and the Cantor Arts Center. In May 2016 she will be completing a DMA in Music Composition from Stanford University. CalArts ’08.

Beep was installed in the WaveCave from October 19th to November 1st, 2015.